Use of serum biomarkers can provide an incremental value in disease severity assessment and prediction, since

Based on the results from a number of reports investigating KL-6/MUC1, the serum levels of KL-6/MUC1 are useful for 1) detecting the presence of disease, 2) evaluating disease activity, and 3) predicting outcomes in various types of ILDs. Because the measurement of serum KL-6/MUC1 levels is rapid, inexpensive, reproducible, less invasive, and easier to perform than SLB, HRCT, BAL, and pulmonary function tests, we believe that this biomarker would provide a significant benefit to the clinical management of patients with ILDs.2

Pulmonary conditions, such as emphysema or pulmonary hypertension, combined with ILD, can confound the interpretation of PFT results. Furthermore, respiratory failure due to acute exacerbation of ILD often inhibits patients from properly performing PFT. In addition, the corresponding type of CTD-ILD suggested by HRCT is insufficient to evaluate the current disease status or predict disease progression.5

With the recent development of new treatments for lung fibrosis, it is critical to identify those patients who will develop lung disease at an earlier stage, and to rapidly identify those whose disease will progress to extensive lung fibrosis. Moreover, enriched populations of patients would facilitate clinical trials and the faster development of innovative therapies. To date, none of the abovementioned validated lung functional/radiologic measures or serologic markers would allow the prediction of progression of lung fibrosis over time in patients with Systemic Sclerosis (SSc); such measures could help individualize the management of specific risk in each patient. Therefore, there is a growing interest in identifying and use of biomarkers for the diagnosis of lung fibrosis, assessment of lung fibrosis severity and activity, and prognosis in patients with SSc who have already been diagnosed as having ILD.1

Beyond the functional and imaging classification of disease progressing, due to numerous data it gets more and more clear that there is a link between serum proteins and the presence or severity of ILD. Elevated serum Krebs von den Lungen-6 (KL-6) levels have been identified in several non-IPF ILDs, including NSIP, HP, CTD-ILD, and sarcoidosis.3 Longitudinal analysis of serum KL-6 in a small cohort of patients with SSc showed that rapidly increasing levels of KL-6 were associated with new onset or progressive fibrosis, whereas stable KL-6 levels were associated with stable disease.

In patients with SSc-ILD, Kennedy and colleagues also identified KL-6 as a biomarker that could prospectively predict lung function decline in these patients. Results from a more recent study by Salazar and coworkers support the notion that higher baseline KL-6 levels are predictive of more active disease, which is associated with subsequent deterioration of lung function and the development of respiratory failure.

KL-6 is a specific epitope of the heavily glycosylated mucin 1 protein
Mucin 1 is identical CA 15-3.
CA 15-3 - marker for monitoring early recurrence of different conditions including ILDs as well as breast cancer.
KL-6 - specific marker for MUC1 expression by the lung tissue.

KL-6/MUC1 is detectable in the serum of patients with ILD, and extensive investigations performed primarily in Japan have revealed that serum KL-6/MUC1 is elevated in 70-100% of patients with various ILDs, including idiopathic interstitial pneumonias, collagen vascular disease-associated interstitial pneumonia, hypersensitivity pneumonia, radiation pneumonitis, drug-induced ILDs, acute respiratory distress syndrome, pulmonary sarcoidosis, and pulmonary alveolar proteinosis.7 The results from various studies have supported the utility of KL6/MUC1 as a serum biomarker for detecting these various ILDs. Moreover, KL-6/MUC1 serum levels have been demonstrated to be useful for evaluating disease activity and predicting the clinical outcomes of various ILD types.2

Ishikawa et al. clearly demonstrated that ased on the results of a carbohydrate composition analysis KL-6 is a sub molecule of MUC1. In accordance with these different observations, KL-6/MUC1 is commonly used to denote the KL-6 molecule. The possible carbohydrate epitopes of the anti-KL-6 mAb have been reported to be novel O-linked glycans containing 60 sulfo-Gal/ GalNAc of MUC1. 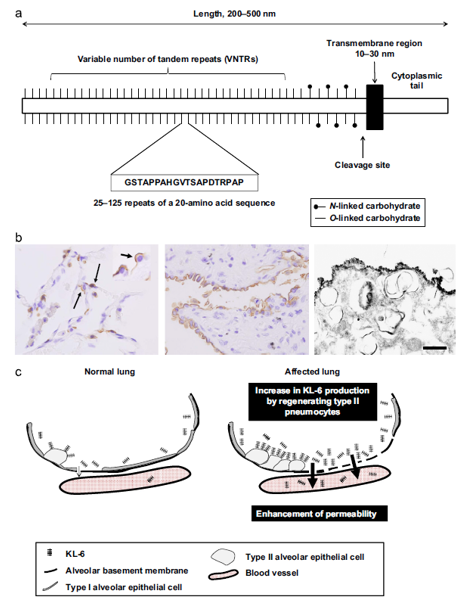 FIGURE 5 (from Ishikawa 2012): (a) Structure of MUC1. MUC1 is a large glycoprotein that contains 3domains: (1) a cytoplasmic tail, (2) a single transmembrane region, and (3) an extracellular domain. The extracellular region contains sites of O- and N-linked glycosylation and a variable number tandem repeat (VNTR) domain of 20–100 repeats of a 20 amino acid sequence, (b) KL-6/MUC1 expression on the surface of type II pneumocytes. A discontinuous positive reaction (arrows) with anti-KL-6 antibody was observed in presumably normal lung tissue from a case of pneumothorax (left panel; magnification, _400). Note the distinct dome-shaped positivity of the type II alveolar cells on staining with KL-6 antibody (inset at left panel; magnification, _800). Linear and continuous staining for KL-6/MUC1 was observed on the cell surface of regenerating type II pneumocytes in patients with IPF (middle panel; magnification, _400). Immunoelectron microscopic findings revealed that the reaction with anti-KL-6 antibody exhibits a linear pattern on the cell surface of type II pneumocytes in a patient with NSIP (right panel; magnification, _400). Note that positive surface granular structures are approximately 100–200 nm in diameter. Scale bar ¼ 0.5 lm. Modified from, with permission from the publisher. (c) Mechanism for the blood uptake ofKL-6/MUC1. The increased serum levels of KL-6 in patients with ILDs may be due to an increase in KL-6 production by regenerating alveolar type II pneumocytes and/or enhanced permeability following the destruction of alveolar capillaries in the affected lung.

KL-6 is a commercially available monoclonal antibody raised against a specific epitope of the heavily glycosylated mucin 1 protein. In the literature, however, the term KL-6 is commonly used to indicate the protein, rather than the antibody.

Mucin 1, encoded by the MUC1 gene, is identical to the target molecule to which antibodies have been developed collectively known as CA 15-3. The CA 15-3 assay utilizes a couple of antibodies which are directed against a unique variable-number tandem repeat on the protein backbone (DF3) and a carbohydrate epitope on that repeat (115D8). CA 15-3 and commercial kits alike are currently being used as markers for monitoring early recurrence of breast cancer, while KL-6 has been claimed to be specific to MUC1 expression by the lung tissue. The latter is supported by studies reporting that KL-6 specifically recognizes mucin 1 that is derived from type II pneumocytes following injury and subsequent regeneration.4

Both epitopes of CA15-3 and KL-6 exist in different positions of MUC1 expressed on the surface of various epithelial cells. MUC1, classified as a member of the mucin family, is a high molecular weight glycoprotein rich in O-glycosylated serine and threonine residues. The upregulated expression of MUC1 has been noted in breast and lung adenocarcinomas. Monoclonal antibody for BCA225 is the same as that recognizing CA15-3. KL-6, BCA225 and CA15-3 are all recognized as members of the mucin family [Ri 2009]. Glycosylation at Thr/Ser residues of the tandem-repeating MUC1 peptides appears to determine the disease-associated antigenic structures of KL-6.6 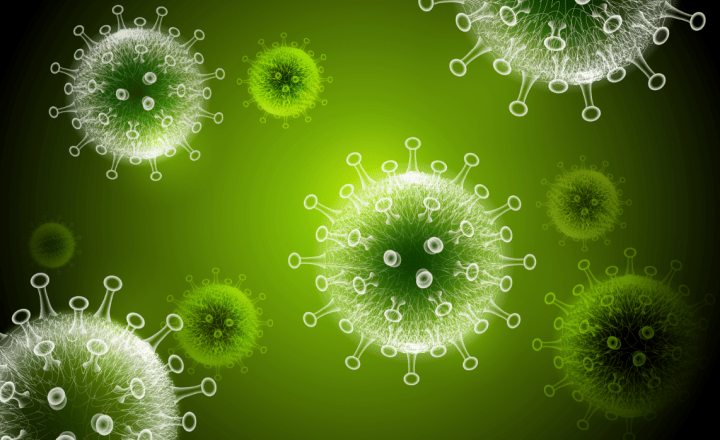 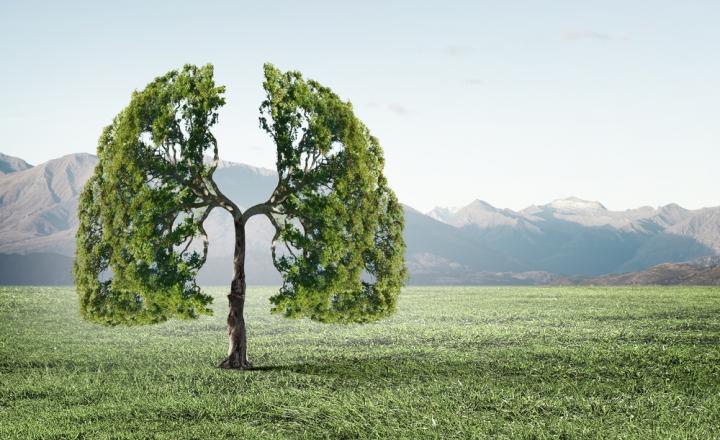 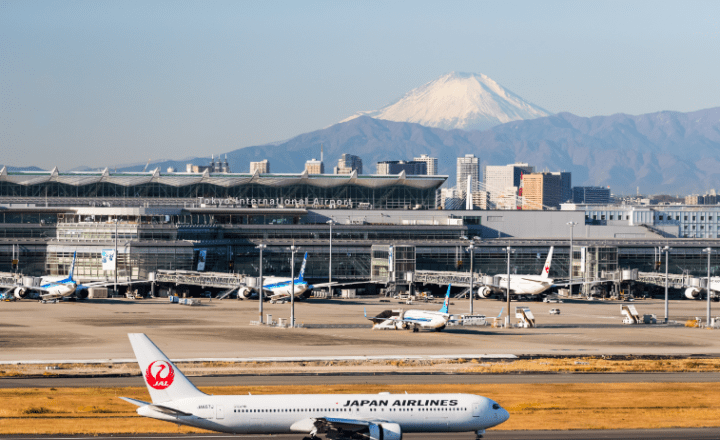 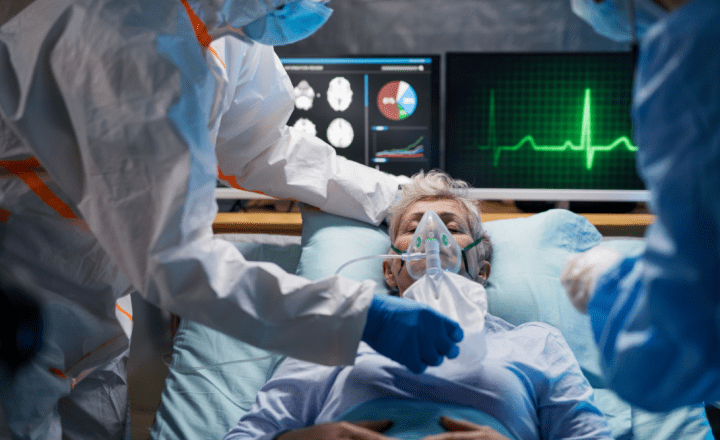 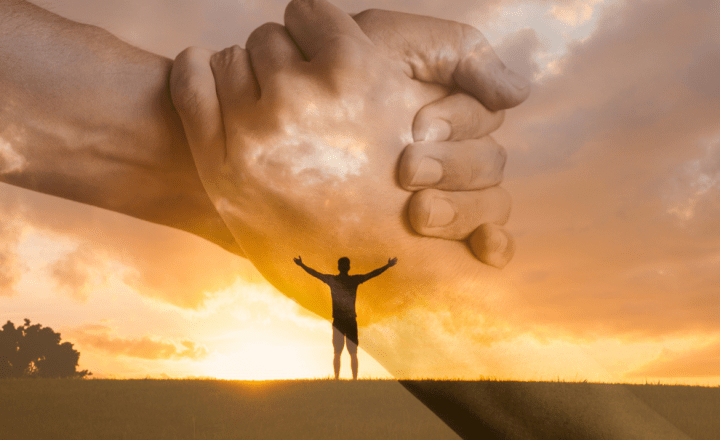 From Classification to disease activity

While IPF is the classic fibrosing ILD, clinical data suggest that there is a larger group of patients with differing clinical ILD diagnoses who... 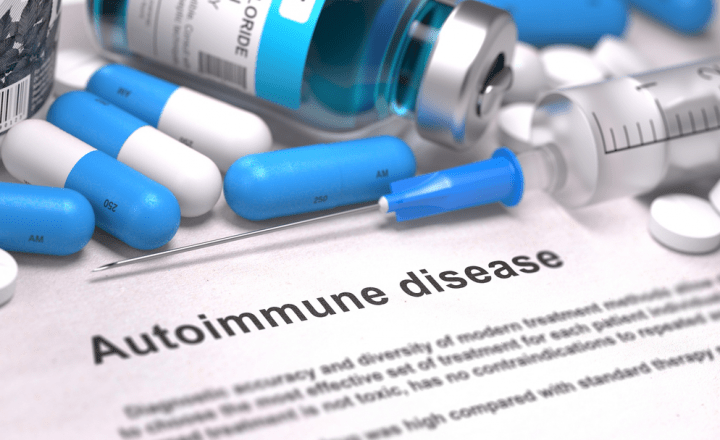 Recent research has shown that serum and bronchoalveolar lavage fluid level of KL-6 has an important value in the diagnosis, treatment assessment and... 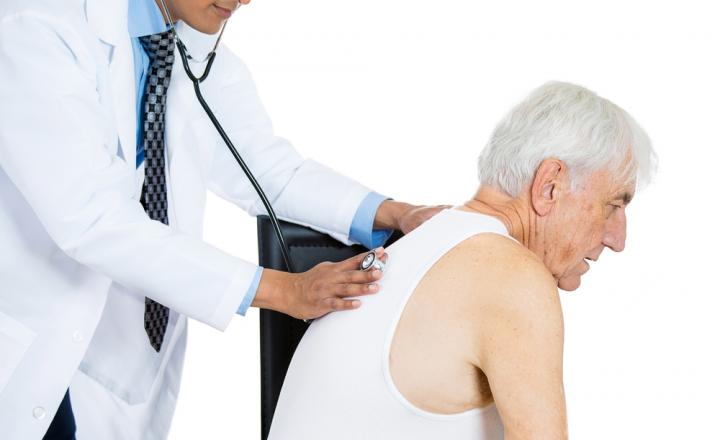 Accurate diagnosis of IPF is critical, as other forms of ILD that have similar clinical presentations to IPF require different treatment strategies. 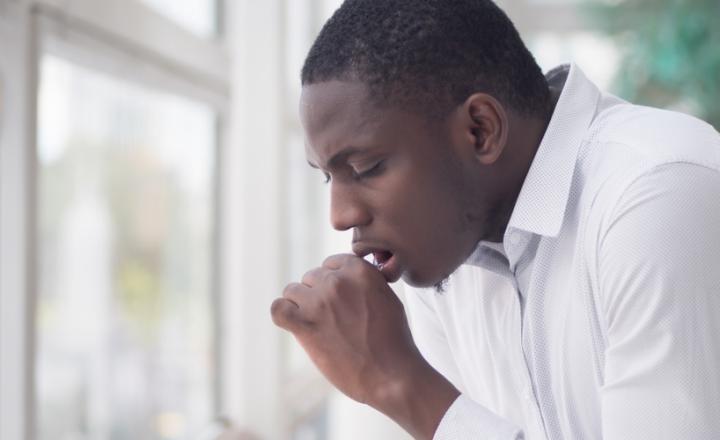 Interstitial lung diseases (ILDs) represent a large, heterogeneous group of more than 200 different entities, most of which are classified as rare... 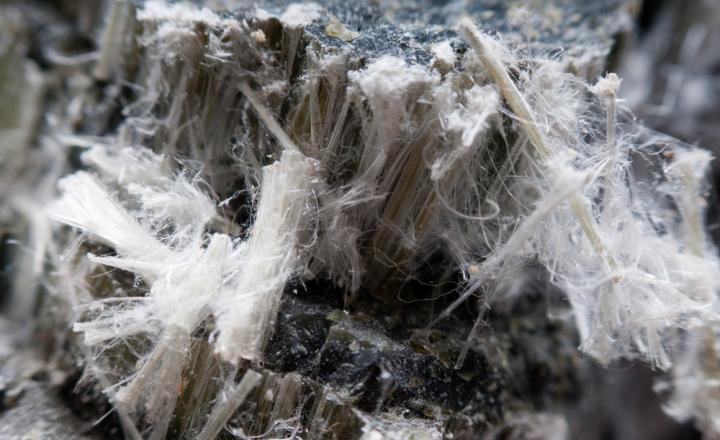 Mesothelin, the novel, non-invasive in vitro biomarker to aid in the diagnosis of Mesothelioma

Mesothelioma is a rare form of cancer that is linked to exposure to asbestos. Although malignant mesothelioma remains a relatively uncommon malignancy...

Real-time RT-PCR test for the qualitative detection of HA gene from Influenza A/B virus and N and ORF1a gene from SARS-CoV-2 in nasopharyngeal swab.

Qualitative detection of nucleic acid from the SARS-CoV-2 in nasopharyngeal swabs, oropharyngeal swabs and saliva specimens from individuals with signs and symptoms of infection who are suspected of COVID-19.

For in vitro diagnostic (IVD) use with the Lumipulse G system for the quantitative measurement of IgG antibodies to SARS-CoV-2 nucleocapsid (N) protein in human serum or plasma. SARS-CoV-2 N antibody measurement is intended to be used as an aid in the assessment of immune response to the SARS-CoV-2 N protein.

For in vitro diagnostic (IVD) use as quality controls, to monitor the precision and accuracy of the Lumipulse G SARS-CoV-2 N-IgG assay on the automated LUMIPULSE G System.

For in vitro diagnostic (IVD) use with the Lumipulse G system for the quantitative measurement of IgG-type antibodies SARS-CoV-2 spike protein (SARS-CoV-2 S-IgG) in specimens based on CLEIA technology by a specific two-step immunoassay method on the LUMIPULSE G System.