PIKVA-II (Protein Induced Vitamin K Absence or Antagonist-II) is an immature form of prothrombin also known as DCP (Des-gamma-Carboxy Prothrombin), vitamin Kcoagulation factor, synthesized in the liver. In absence of vitamin K or when its action is antagonized (warfarin), PIVKA-II is released into the blood.

Phenotypic changes of liver cells enhance the production of PIVKA-II via impairments of vitamin K uptake1. PIVKA-II is an established HCC marker.

PIVKA-II serum and tissue overexpression are related to worse tumor behavior2-3, such as the presence of (micro) vascular invasion and intrahepatic metastasis of HCC cells and may indicate a poor prognostic outcome. 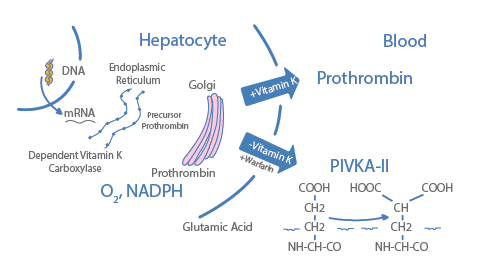 The starting point in the diagnostic surveillance of at risk patients is ultrasound. In a second stage this can be completed with the measurement of a tumor marker called α-fetoprotein (AFP). Since ultrasound has a poor performance in cirrhotic patients and is also operator dependent, further characterization by CT or MRI is often required.

As it is important to detect HCC at an early stage when the disease is still curable, biomarkers can complete the diagnosis obtained with ultrasound before moving on to the more expensive MRI. Biomarkers can also be used to better stratify patients on the liver transplant waiting list. Additionally, the risk of recurrence of HCC after transplantation can be assessed by monitoring patients with biomarkers.